To Rejoice Or Not To Rejoice?

There is a famous Midrash regarding the proper attitude we should have when our enemies have fallen: 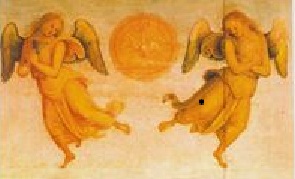 Talmud  Tractate Megillah 10b:
As the Egyptians started to drown in the Red Sea, the heavenly hosts began to sing praises, but God silenced the angels, saying, "The works of my hands are drowning in the sea, and you wish to sing praises!"
In high school the moral I was taught from this Midrash is that you should not rejoice at the death of your enemies. However, post high-school I started hearing a different reading. The new understanding stressed the fact that it is Angels who are being criticized for their singing.  The moral level where one should not show joy at the downfall of his enemies is reserved for the heavenly plane. This understanding of the Midrash is backed up by the fact that there seems to be no criticism of Israel singing the "Shirat Hayam" after the splitting of the red sea.

I've never felt really comfortable with either reading. I'll address the second reading first. I can't accept it as it contradicts a  clear Pasuk in Proverbs "Don't rejoice when your enemies fall; don't be happy when they stumble." (24:17) . This proverb is clearly not talking of the heavenly plane.  Secondly, I can't accept the total rejection of the moral intuition that all human life is sacred even that of your enemies.
However the first reading of the Midrash – the broad ban of rejoicing at the fall of your enemies is equally unsettling. I cannot accept that such a basic human reaction should be suppressed.  What kind of person really does not rejoice in his heart at the downfall of his enemies? This is especially true in the context of the exodus, where Israel was not facing a minor enemy. The Egyptians would most likely have killed or enslaved the Israelites if they had not been drowned. Can we really not rejoice at being saved from that fate?
And so I believe we are being called upon to live in a dual system. Judiasm often teaches that we should harbor two conflicting emotions or thoughts simultaneously. For example even during the joy of a wedding we stop everything to remind the public that we are still mourning Jerusalem. In this case my reading of the Midrash is that we should have some joy at the fall our enemies, but at the same time we must feel guilty about it.  Our guilt serves to acknowledge the two sides of this situation.
Sidenote: The lead up to this discussion is clearly my last post and the comments that were posted. However I honestly do not see the victims' of the Norwegian terrorist as enemies.

Posted by Benjamin of Tudela at 10:13 AM

Email ThisBlogThis!Share to TwitterShare to FacebookShare to Pinterest
Labels: Midrash