My Kind of Judge

From Catoatliberty.org blog, one of the finer moments of the American legal system:

Just for fun, and because it’s a summer Friday afternoon, here’s the text of a court order handed down July 19 by Kentucky judge Martin Sheehan in the case of Kissel v. Schwartz & Maines & Ruby Co. (ScribD, h/t Nicole Black and Daniel Schwartz):

And such news of an amicable settlement having made this Court happier than a tick on a fat dog because it is otherwise busier than a one legged cat in a sand box and, quite frankly, would have rather jumped off of a twelve foot step ladder into a five gallon bucket of porcupines than have presided over a two week trial of the herein dispute, a trial which, no doubt, would have made the jury more confused than a hungry baby in a topless bar and made the parties and their attorneys madder than mosquitoes in a mannequin factory;
IT IS THEREFORE ORDERED AND ADJUDGED by the court as follows:
1) The jury trial scheduled herein for July 13, 2011 is hereby CANCELED…

If you’re curious to know more about Judge Sheehan, a quick Google search indicates that he’s a judge who’s thrown out a lawyer’s libel suit against a critic (a prosecutor!) on the ground that it was constitutionally protected opinion; that he’s adopted civility rules to keep lawyers from beating up each other and each others’ clients over much in his courtroom; and that hestruck down as unconstitutional an overreaching state law that retroactively sought to restrict where past sex offenders could live. Better and better….


In a similar manner, this decision in a local Tel-Aviv court (sorry no time to translate): 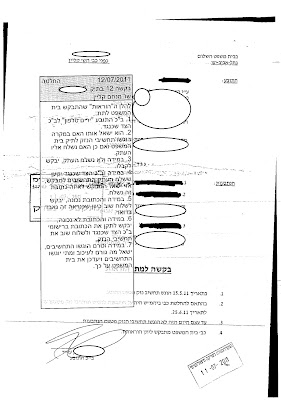 Posted by Benjamin of Tudela at 9:45 AM