The following picture, supposedly from a high school's official text was posted on Rotter.Net: 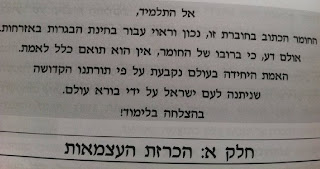 The text reads : To the student. What is written in this booklet, is good and appropriate for the "Bagrut" exam in Citizenship. However you should know, that most of the material does not correspond to the truth. The one and only truth in the world is told by our holy torah that was given to the people of Israel by God himself. Goodluck Studying. Part 1: The declaration of Independence.

Some of the comments in Rotter are claiming that this isn't an official school text, just a popular "summary" that is sold to students. Regardless I can think of no better example of double-speak. I am fairly certain that no student who reads this booklet is going to be a good citizen later. However I take some comfort that even though whoever wrote this booklet believes it to be a lie, perhaps some of the readers will be more convinced by the content rather then the warning on the cover. I prefer religious students learn about civil rights, albeit with a disgusting warning, then learn nothing at all.

Posted by Benjamin of Tudela at 5:02 AM