A bad year for the Dreidel 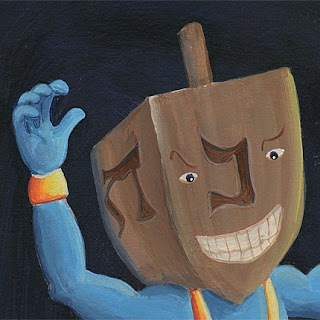 It seems the dreidel is having a bad year. Howard Jacobson bashed it in this NYT op-ed:

"How many years did I feign excitement when this nothing of a toy was produced? The dreidel would appear and the whole family would fall into some horrible imitation of shtetl simplicity, spinning the dreidel and pretending to care which character was uppermost when it landed. Who did we think we were — the Polish equivalent of the Flintstones?"

The Dreidel is being bashed on Tablet Magazine as well in their post "The Unbearable Dumbness of Dreidel":


See the problem? The game is over basically right after it’s begun! At best, it turns into some weird and boring stalemate-cum-lesson on fractions, in which you learn that if you keep halving a pile you will never get to zero. Moreover, the game requires none of those characteristics—wit, ingenuity, or even brute strength—that the Maccabes used to vanquish those evil Syrian bastards two thousand-plus years ago.

Perhaps a sole light in the dark for the dreidel is this new Guiness book of records set yesterday - 618 dreidels spun simultaneously! (why not 613 I ask?).

However it isn't really the dreidel's fault. The dreidel is a relatively new-comer to Jews. According to this Seforim post, the dreidel has only been with us 200 years or so.

Despite all of these explanations, in truth, dreidel is not Jewish in origin. Rather, driedel is really the rather old game of teetotum. Teetotum, which uses a top with four sides and four letters is one and the same with dreidel. The letters that appear on the dreidel are really just the Hebrew letters that appear on a German or Yiddish teetotum, G, H, N, S. G= ganz (all), H halb (half), N nischt (nothing) and S schict (put). Teetotum dates back to at least the 16th century long before we have any Jewish allusions to dreidel(it was originally totum or top, but became TEEtotum due to the use of T for take all, on the top). The well-known depiction of children's games done by Brueghel in 16th century includes Teetotum(see here and here for the complete painting). The earliest Jewish mention of dreidel or the significance of it dates to the late 18th century.

Looking at the book אוצר מנהגי ישורון which is credited as being the first mention of the dreidel, I discovered that another game, was the game for Hanukah: CARDS!! 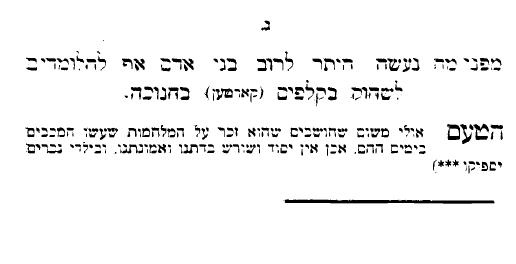 A quick Googling found me another Sephorim blog entery, which brought accounts of card playing on Hanukkah as early as 1584!

R. Yehudah Aryeh Modena writes about himself in his autobiography how "during Chanukah of the year 5355 (1594) Satan fooled me into playing games of chance causing me no small amount of damage.” (The Autobiography of a Seventeenth Century Venetian Rabbi, p. 97). R. Yakov Emden writes against this custom in his Meor Uketziah which he says people used to do on Chanukah [introduction to hilchos Chanukah and end of siman 670].

(I'll leave it to someone else to comment on the cross dressing minhag also mentioned there. Bloghead perhaps?)

So in conclusion. Dreidel out, poker in!

Posted by Benjamin of Tudela at 12:37 AM

actually, the dreidle, the latkes & the doughnuts are minhagim ashkenazim and have nothing to do with halakha. in fact these days kol bar daat, realises that both latkes and doughnuts are toxic and shouldn't even be mentioned with nostalgia or any other positive way. using oil to commemorate the oil miracle? why not a tea spoon of olive oil in a dressing? :-)

as to the dreidle being a diminutive poor kids toy, u r right, no doubt about it, there is no way it can win in a shouting match with poker or even wii and an xbox.
even the gogoeem of passover are more fun!

I suggested bloghead comment on the tradition to cross-dress in Hanukah, not on the dreidel.

As for Stjust lack of enthusiasm for the Doughnut - I'm actually a big fan. It is possibly the only "Jewish" food I actually like eating.

>I discovered that another game, was the game for Hanukah: CARDS!!

Chanukah card playing is still very much alive. You can even by a set of very Yiddish looking cards called "Kvitlach" and play - yes, Kvitlach - which is basically Blackjack. When I was in yeshiva it was popular, albeit not with the, you know, most straight-laced guys. Gambling is gambling.

====How many years did I feign excitement when this nothing of a toy was produced? The dreidel would appear and the whole family would fall into some horrible imitation of shtetl simplicity,