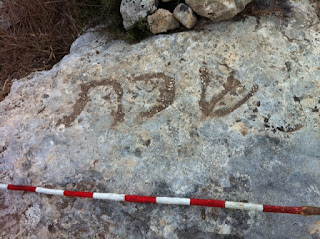 This story was reported in JPOST:


An ancient rock inscription of the word “Shabbat” was uncovered near Lake Kinneret this week – the first and only discovery of a stone Shabbat boundary in Hebrew.

The etching in the Lower Galilee community of Timrat appears to date from the Roman or Byzantine period.


News of the inscription, discovered by chance Sunday by a visitor strolling the community grounds, quickly reached Mordechai Aviam, head of the Institute for Galilean Archeology at Kinneret College.

“This is the first time we’ve found a Shabbat boundary inscription in Hebrew,” he said. “The letters are so clear that there is no doubt that the word is ‘Shabbat.’”

Aviam said Jews living in the area in the Roman or Byzantine era (1st-7th centuries CE) likely used the stone to denote bounds within which Jews could travel on Shabbat. The Lower Galilee of Late Antiquity and the Early Middle Ages had a Jewish majority – many of the Talmudic sages bore toponyms indicative of Galilee communities.
The engraving uncovered in Timrat is the first and only Shabbat boundary marker yet discovered in Hebrew – a similar inscription was found in the vicinity of the ancient Western Galilee village of Usha, but its text was written in Greek.

Aviam and his colleagues plan to enlist local help in scouring neighboring areas to locate additional inscriptions, and eventually to publish their findings in an academic journal.

“This represents a beautiful, fascinating link between our modern world and antiquity, both emotional and archeological,” Aviam said. “Certainly for those of us who are religiously observant, but also for the secular among us who enjoy a stroll on Shabbat to know that we’re walking in places where Jewish history lived two thousand years ago.”

There is at least one other similar case I'm aware of - some stones found around Gezer, with markings saying "boundary" were found. You can see pictures here.  However I've always been a little skeptical - I just don't remember a talmudic or other early source mentioning this kind of custom.
H/T Elder of Zion.
Posted by Benjamin of Tudela at 3:00 AM