I've mentioned a the Torah Leflet "Shabat Be'shabato" a few times before. It is often considered one of the higher quality Tora Leaflets handed out every week. However this week, it was notable for causing me to stop in the middle of davening with a shocked expression on my face. The reason was the following advert: 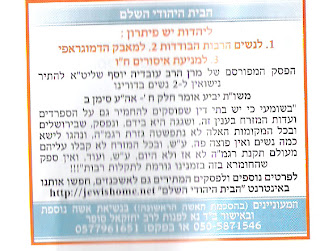 Let me try and translate:


Judaism has the solution for:
1. The many lonly women. 2. The demographic fight. 3. Preventing committing Sins (God Forbid).
The famous psak of Maran Harav Ovadia Yosef SHELI"Ta allowing a man to marry two women in our age (Yabia Omer, Book 8, EH"A mark B)
....(quotes psak)
For further details and Psaks that allow also Ashkenazim search for us on the internet "The complete Jewish Home" http://Jewishhome.net.
For those interested (With the consent of the first wife) in marrying another woman with the permission of a Beit Din Call....

I had a look at the website (with my wife looking over my shoulder and holding a gun). It is a collection of videos about polygamy in Israel, and "Psaks" that would seem to allow it. I wouldn't describe it as a website that screams "loony", more as a website which just says it over and over again, until you get the point. For those of you who are interested the website also states that they are looking for Polygamous Jewish couples who are interested to set up a Yishuv in the Galil.

I'll try and look at the psaks tomorrow, unless some blogger beats me to it.
Posted by Benjamin of Tudela at 2:26 PM