As I've previously stated, this year I'm reading Ibn-Caspi on the parasha. I was quite surprised by what he had to say regarding this weeks parasha 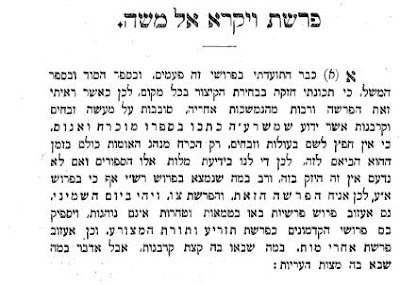 Basically Ibn-Caspi states that he doesn't feel a need to explain parashat "Vayera" or the next few Parshiot since it is "well known that Moshe Rabenu was forced to write them" since God isn't really interested in sacrifices, and that it was an accomedation for  that generation. Therefore there is little harm at not knowing these parashas at all.
The view that sacrifices were the lesser evil is a well known Ramabamic view. However I've never seen anyone take it so far, as "therefore I won't bother explaining them". Its these kind of views that explain why a really brilliant commentator is almost unheard of in the modern Jewish life.
Posted by Benjamin of Tudela at 10:45 AM