It seems like the Haredi market has recently been envious of the Kabbalah water - and decided to join the fun of getting fools to part from their money.

For the last few weeks this ad has been running in the Shabbat Alonim: 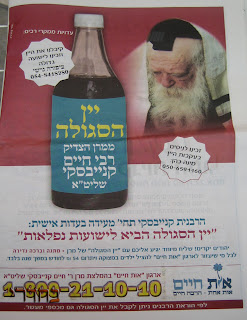 The ad is for buying wine blessed by Harav Kanievski. The line under the bottle says that his wife testifies to the great wonders this wine has performed (apparently women are allowed to testify to such things). This was bad, but it seems it was only the opening shot of a whole segulah brand being developed around Harav Kanievski. 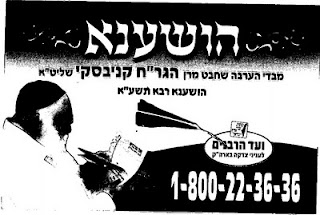 This card is offering to sell leafs from the Arava that Harav Kanievsky used on Hoshana Raba. Can't they just sell red strings and kabbalah water?

Posted by Benjamin of Tudela at 2:30 AM