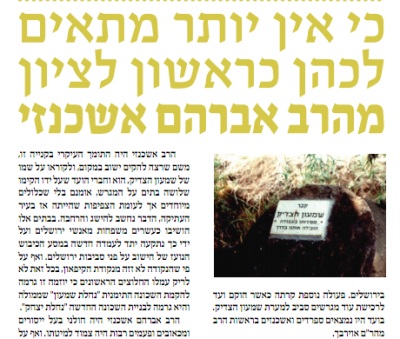 The Shabbat Pamphlet "Yesha Shelanu" (יש"ע שלנו) managed to amuse everyone. They have a weekly feature where they tell the story of some Rabbi and their special connection to some location in Israel. This week they wrote about Rabbi Avraham Ashkenazi - and about how he worked hard to secure the purchase of the cave of "Shimon Hatzadik" in Jerusalem. So where is the problem? have a very close look at the tombstone on the picture. Under the line "Shimon Hatzadik" it says "His commitment in work lead us on our way". Slightly weird inscription for a rabbi. Turns out this isn't the right tombstone. This is the joke burial site for a horse at a horse farm near the kinneret. The editors of the pamphlet, clearly just googled "Shimon Ha'tzadik" and posted the first picture that came up..