So I've been a bit slow on this one. Following last Friday's Psak Halacha by Harav Ovadia confirming that all conversions in the army are kosher, both sides have been busy gluing their accusations on every available wall in the city. Here are some of the better ones: 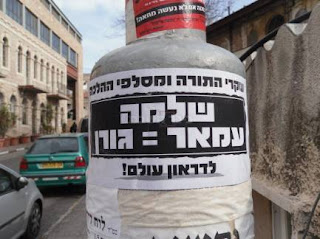 This Pashkevil compares Sepharadic Chief Rabbi to former Chief Rabbi Goren. Harav Goren is actually fairly admired in Dati-Leumi circles, but is considered a Kofer by Haredim, following a Psak Halacha where he allowed two "Bastards" to marry. 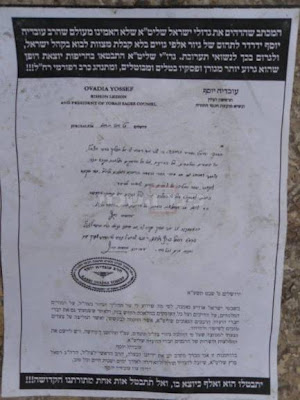 This one is not really that interesting or original. Its just Rav Ovadia's Psak with the title roughly translated as follows:  "The letter that shocked the Gedolim, who couldn't believe that Harav Ovadia Yosef could reach such a low of allowing the conversion of thousands of Goyim without accepting the yoke of Mitzvot, to enter the Jewish people and create mixed marriages. The Gedolim Shlita have come out harshly and said that he is worse then Goren and his Psaks are hereby cancelled, and he is acting like a reform rabbi may god have mercy!"

From the Pro- Harav Amar Camp: 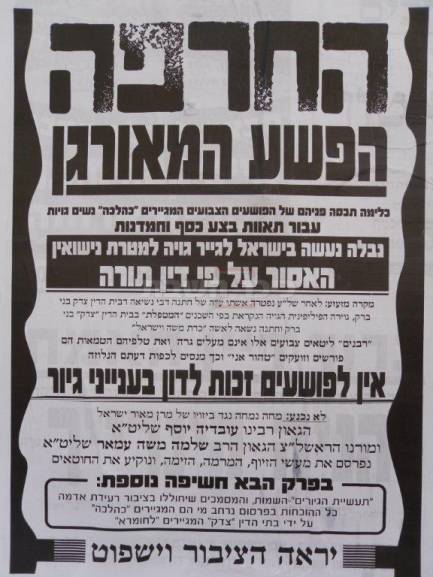 Well this one is interesting though I can't fully make it out. It accuses that an Askenazic Rabbi from Bnei-Brak married the Philippine caretaker of his deceased wife...basically they allowed a conversion just for the sake of marriage.

You can find a few more here.
Posted by Benjamin of Tudela at 5:07 PM