More on the "Jewish Burqa"

I've written in the past about the cult of the Jewish Burqa and its rapid spread (see also a bloghead blog about this). Two stories are coming forth on the Haredi Forum "חדרי חרדים":
The first is about a Haredi girl who was being pressured by her parents to wear the Jewish Burqa. She refused for two years, until they forced her to go to a councilor. While there it was revealed that this girl had an Arab boyfriend!
- Some of the comments: Well if she has to wear a burqa she might as well marry an Arab.
Second story: The wearing of a burqa is now not just for married women, as this picture shows: 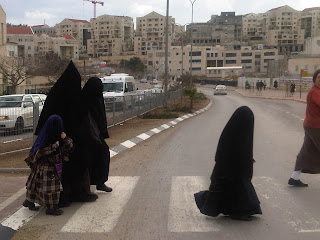 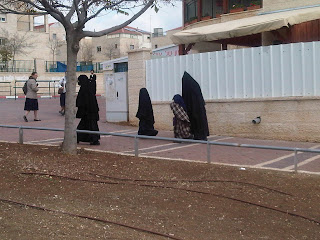 They are also reporting on some of the minhagim this "cult" has developed:
Reportedly when these women walk down the street, they are followed by a crowd of people harassing them.
The second story is especially interesting since the writer confesses that this cult is spreading rapidly, and is no longer just a "Chozer Be'teshuva" phenomenon. There is a real fear that this will slowly become the new norm for Haredi women. The fact that this has now spread to young unmarried girls is even more troubling. There is already a community with its own schools. The first story is illustrates how this is being forced on girls against their will. It is probably also illustrative of the damage this is doing to the young girls - who are fleeing their parents regime into the hands on non jews. (Though honestly there are plenty of other frum girls who run off with Arab boyfriends, as reported in the news recently).
It is time for Rabbanim to come out clearly against them and nip this terror in the bud!
Side notes: "Burqa Woman" sung to the tune of pretty woman.
Posted by Benjamin of Tudela at 12:56 AM