A Prayer For Napoleon!

Continuing on my recent post regarding the declaration of a Jewish State by Napoleon - The international Napoleonic society has this prayer for Napoleon on their website: 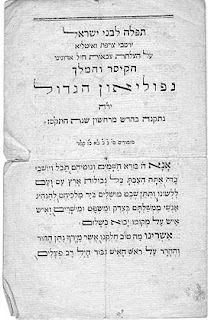 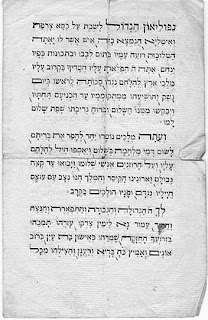 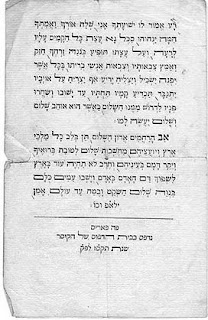 The Napoleonic society is also kind enough to provide this translation:

Prayer of the Children of Israel
Citizens of France and Italy
for the success and prosperity of our Mater's Army
The Emperor, the King Napoleon the Great
(may his glory shine)
Composed in the month of Cheshvan, year 5567 (1807)
Psalms chapter 20,21,27, 147
I implore Thee, Creator of Heaven and the Universe and all who inhabit it. Thou hast established all boundaries and limitations of the world and each nation with its respective language. Thou didst give the Sceptre of power into the hands of their kings to lead the people under their reign with righteousness, justice, an uprightness; that each person in his own place should live in peace.
How fortunate we are, how good is our lot, that from Thy hand glory and beauty were poured out upon the head of a powerful man, full of vibrancy, NAPOLEON the Great, to sit on the Throne of France and Italy. Could another be found as worthy as NAPOLEON deserving of such honours and kingship, who shepherds his people with sincerity and with the understanding of his heart? Thou, GOD, hast wondrously bestowed Thy kindness upon him. As other Kings of the world approached to fight him, Thou didst protect him on the day of war, Thou didst save him from those who stood up against him, until he subdued them and they sought peace from him. With his kind spirit, he spoke words of peace to them.
Kings have now untied to break their treaty and replace peace with the blood of war. They have gathered armies to fight against him and against all those who admire him. They have come to our borders, and our master, the Emperor, the King, is standing with the might of his army to confront them.
O GOD, master of greatness, strength, power and beauty, we implore Thee to stand next to his righteousness; help him, support him with Thy mighty arm: guard him as the apple of Thine eye with an abundance of strength and health. Save him from all evil and tell him "I am your salvation."
Send Thy light and truth, that they may lead him. Render foolish all those who rise against him for evil. Let Thy light shine upon his plans. Strengthen his armies and those of his allies.
May he succeed in all his endeavors and reign over his enemies. May they seek peace from him, for he is a man who loves peace, and peace he will exercise among his nation.
Father of compassion, Master of Peace, implant in the heads of all Kings and their advisors thoughts of peace and tranquility for the benefit of all mankind. Let the Sword not pass through our land and spill the blood of our brethren. Let all nations unite in total peace and tranquility forever.
May the words of our prayers be acceptable to Thee.
Amen.

As is evident at a glance, this prayer is somewhat more enthusiastic then the normal prayers for heads of states.

Posted by Benjamin of Tudela at 9:02 AM

Email ThisBlogThis!Share to TwitterShare to FacebookShare to Pinterest
Labels: Napoleon I