Just heard on the radio a fascinating talk given by an expert on Jerusalem syndrome. Jerusalem syndrome is when an otherwise mentally healthy person, arrives in Jerusalem and begins to believe he is the Messiah, Jesus, Elijah or sometimes god. These people can often be seen preaching in the street - normally the old city. I was surprised to hear that every year there are between 80-100 people diagnosed with Jerusalem Syndrome.

Another intersting tidbit, is that Jerusalem is not uniqe in having its own mental illness. Mecca for Muslims serves the same purpose as Jerusalem for the Jews and Christians. Florence has a syndrome where normally sane people begin to believe they are great artists. Capital Hill has a syndrome where people request to talk to the president - normally to reveal some conspiracy theory. 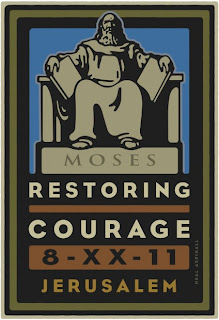 It seems however that one case of Jerusalem Syndrome has gone undiagnosed this year. A few weeks ago while visiting Jerusalem, Glenn Beck announced his "Restore Courage" protest, scheduled for 20.08.2011.