Hands off our Hummus 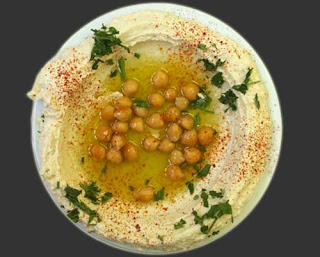 So recently a "Hummus war" is being fought in Princeton. I am not going to get into the boycott argument, since I'm sure enough has already been written about it. I will however add my two cents on one completely irrelevant point:


"Committee President Yoel Bitran wrote that his group objects to the fact that Sabra is the only hummus brand that is offered in most university stores and that students who wish to eat this traditional Arab food are forced to buy a product that is connected to human rights abuses against Arab civilians." (Via Huffington Post)

Traditional Arab food? well maybe. However Hummus has a long long history with the Jews, so I think we should claim it as our own. It is little known that Hummus is actually mentioned in the bible. Via Hummus 101:

On the first time Ruth and Boaz had met in Bethlehem, he offered her some humus: “And at meal-time Boaz said unto her, Come hither, and eat of the bread, and dip thy morsel in the vinegar” (Ruth 2-14).

This is a mistranslation of course. The original word in ancient Hebrew, is “Hometz”. Which not only sounds a bit like “Humus”, but also resembles the word “Himtza”. The Hebrew name of chick-pees.

You can add to that argument that no one has ever normally dipped their bread in vinegar, especially I would imagine workers in the field who are hungry for their food.

This Biblical scholarship is normally attributed to the author Meir Shalev. However I will add that I personally asked the known Hebrew scholar Avshalom Kor about this, and he gave his opinion that this interpretation makes a lot of sense.
Posted by Benjamin of Tudela at 12:11 AM

I heard the same thing, and wrote about it here:

I don't think so, it's nice as a joke with a wink, as wishful thinking, an israeli wet dream to claim the dish, but we have to learn to give credit where it is due!.
but serious, u think they had the hummos ground then to a paste too? with tehina?
otherwise, do you think boaz was inviting her to dip her bread in a bowl of beans? nah, i don't think so.
in fact, putting anachronism aside, from a halakhic p.o.v , 'vetavalt pitech' implies dipping in a liquid. (karpas in the seder) italians till today (a mediterranean culture too)
dip their bread in an omnipresent small saucer of olive oil and vinegar! nah.... homos? no way.

SpellChecK revision:))~Has anyone ever heard of a "Presbyterian Gourmet"?-No.That's because there exists no such thing.Those Orangemen in Jersey ought bind their Spartan radicalisms unto themselves and abstain from imposing draconian "restraints-of-passion" on the heathen.