A VOICE IS HEARD 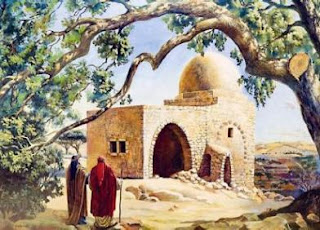 DovBear: The Rachel's Tomb that is now a mosque, is probabl...: "I see from the newspapers that UNESCO has designated Rache's Tomb as a mosque...the proper and correct Jewish reaction to this is: WHO CARES."

As always DovBear manages to annoy his readers, a skill I desperatly need to develop. However, he (yet again) seems to be missing the point, or rather making the wrong one. Dovbear is rallying that Rachel's tomb is either A. Not Rachel's tomb, or B. Not significant religiously even if it was the real Rachel's tomb. Ignoring the fact that the two points are somewhat contradictaroy in spirit, Dovbear is missing the larger picture. UNSECO's decision is irrelevant religiously but not politically. This is just one more attempt to deny any Jewish right to the land of Israel. This is similar to the Palestinian claim that the temple never existed.
On a few side notes, and mostly because I do like to bash Dovbear (it makes me feel that my blog, which no one reads is important) I think we can add a little to the question of just how ancient the identification of the current tomb really is. I should probably disclose that I have a strong affinity for the place having spent months as a soldier sitting on the tombs roof with a machine gun.
Admittadly there are a few problems in the biblical location of Rachel's tomb - The bible itself seems a little confused. However the current identification goes back almost 1700 years. That is probably as good as you can expect from any Jewish identification in Israel.  The following are two Christian sources:

Four miles from Jerusalem, on the right of the highway to Bethlehem, is the tomb in which was laid Jacob's wife Rachel.

Going on towards Bethlehem, she paused where Rachel's Tomb stands on the right of the road, the birthplace of Benjamin - 'not Benoni', 'son of my sorrow' as his mother named him as she lay dying, but Benjamin 'son of my right hand', the prophetic name which his father gave him, inspired by the Holy Spirit..."

As a final sidenote I'd just like to add a small personal story. One night in the wee hours of the morning, while I was as previously mentioned doing guard duty on the roof of the tomb, I found that a woman screaming loudly inside was disturbing my sleep. She kept screaming loudly "Mama Rachel, Don't stop screaming." I let this pass for at least 10 minutes, but after that I opened up the trapdoor in the roof and called down "Rachel cries, she doesn't scream."
I was quite pleased with myself, and was rewarded by a minutes silence, until the same woman started calling with refreshed vigor "Mama Rachel don't stop crying."
I was also kind of amused later that morning, hearing the same woman telling her friend that while she was praying she had heard a heavnly voice from above, telling her that Rachel was crying...what can I say my voice is quite deep and could be mistaken for an angel.
(I confessed to the woman, not wanting to be the cause for some kind of "Miracle Story".)
Posted by Benjamin of Tudela at 12:27 AM