Was Abraham Responsible For Sdom's Demise? 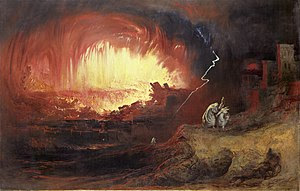 In this week's parasha we are told of how Abraham argues with God over the planned destruction of Sdom. However, it is interesting to note that this isn't Abraham's first encounter with Sdom. Famously, Abraham saved all the people of Sdom, during the war of the kings in chapter 14 where Abraham refuses to receive even a "shoe latchet" as a reward.

Is it possible that Abraham ruined God's lesser evil plan? did God originally only mean to send Sdom into exile as punishment for their sins? However, Abraham ruins the plan to send the men of Sdom into exile, and they continue to sin, until their just punishment is no longer exile, but rather death?
Posted by Benjamin of Tudela at 6:01 AM