Over shabbat I noticed the following two advertisements in the Alonei Shabbat: 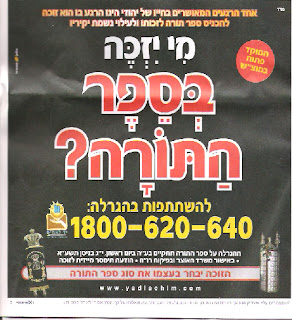 It is hard for me to pin down why I am so uncomfortable by the act of making Sifrei Torah prizes, and yet I am deeply uncomfortable with it. Both myself, and the other people in shul to whom I pointed out the ad  felt that there was something amiss, yet none of us managed to translate our knee jerk reactions into coherent explanations. One person even stated that had they been giving away a Shas (Talmud)  none of us would have reacted - so why is a sefer torah any different?
A torah scroll is not the same as a Shas. Halachiacally and socially we treat a Torah Scroll differently then a Shas - so much so that when a scroll is destroyed we mourn for it. I would argue that the feelings of wrong caused by these raffles is that they objectify the Sefer Torah. As weird as it sounds I feel a Torah is Scroll that is a He/She, not an It.The "Donate you might win a Torah" attitude, makes winning a torah sound like an act as simple as winning an Ipad. Buying a torah, or donating one are normally highly emotianly acts, or expressions of deep spiritual commitment, "Winning" a torah, just isn't. It treats the torah scroll as an object like any other - you might just win one without any real effort. Making a Sefer Torah a prize somehow brings its monetary attributes out into the forefront. It objectifies the Torah. What is next - collecting coupons at the supermarket toward buying a Torah?

Posted by Benjamin of Tudela at 2:01 AM