According to the Washington Post, Netanyahu's "Red Line" Actually Worked! 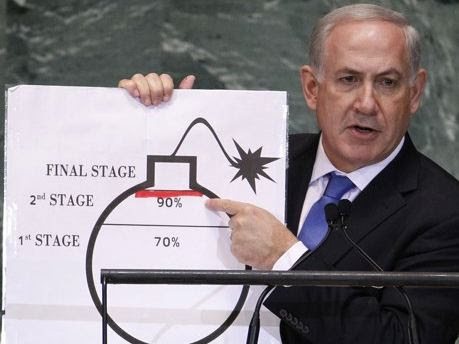 "A host of commentators both in the United States and Israel scoffed at what they called Mr. Netanyahu’s “cartoonish” picture of a bomb and the line he drew across it. The prime minister said Iran could not be allowed to accumulate enough 20 percent enriched uranium to produce a bomb with further processing, adding that at the rate its centrifuges were spinning, Tehran would cross that line by the middle of 2013.

Iran, too, dismissed what its U.N. ambassador called “an unfounded and imaginary graph.” But then a funny thing happened: The regime began diverting some of its stockpile to the manufacture of fuel plates for a research reactor. According to the most recent report of international inspectors, in February, it had converted 40 percent of its 20 percent uranium to fuel assemblies or the oxide form needed to produce them. As a result, Iran has remained distinctly below the Israeli red line, and it probably postponed the earliest moment when it could cross that line by several months."


People may begin to eat their hats now.
Posted by Benjamin of Tudela at 2:24 AM