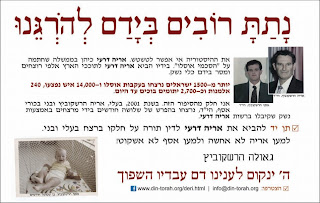 This ad published this week in Be'Sheva is a call for Arieh Deri, the leader of Shas (Israeli Haredi political party) to be tried in a rabbinic court (Beit Din - not to be confused with the state's own Rabbinic Courts) for his part in approving the Oslo Agreements. The author claims that due to the Oslo Agreements, thousand of terrorists were allowed to enter Israel (presumably he means the territories) and then cites the number of Israelis killed by terrorists since Oslo. Notably the author's own husband and kids are included in that category.
Previously there was a similar attempt to call MK Gafni from Yahdut Hatorah to a rabbinic court over his involvement with the Gaza Disengagement plan. Interestingly, the rabbinic court agreed to hear the case, rather than rejecting it out of hand. If anyone knows what happened with the case, I would be interested to know.

Both cases are examples of the special vulnerability of Hardi MKs. In a rabbinic court it would seem MKs do not enjoy immunity for their actions. This means that Haredi MKs need always worry that they will personally be attacked using Halachic Lawfare. I would guess that their best defense will be to make sure that the cases are heard in a sympathetic tribunal. Normally the respondant can choose the Beit-Din where a case will be heard, and in this case all MKs would be wise to navigate to a Zionist Beit Din where there is a good chance that they would accept wider considerations of immunity for MKs, or even  accept the state's immunity as Dina Demalchuta.

Posted by Benjamin of Tudela at 1:09 AM