"Blowing Up The Dome of the Rock" v. "Wiping Israel Off The Map"

Yesterday a small storm in a teacup erupted in the Israeli media, when Israel Channel 2 news aired a video showing Jeremy Gimpel - 14th place candidate in the Jewish Home party - badly expressing his views on the Temple Mount:

When I watched the video, my initial reaction was that it was crystal clear that  Gimpel was making a joke, and in no way whatsoever was he actually calling for the Dome of the Rock to be blown up. It was so clear, I couldn't initially understand how anyone could think otherwise. I had this twitter exchange with Jeffery Goldberg: 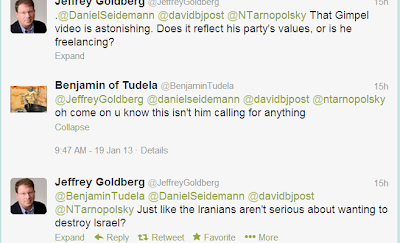 The conversation continued for a few tweets. However, the question Goldberg asked, namely what is the difference between Gimpel's comment and the Iranian threats is a hard one.

Trying to think of an answer, exposed to me some of my underlying assumptions. I feel more than qualified to dismiss Gimpel's comment as a joke. This dismissal is based on my familiarity with religious, anglo-Israeli, RZ  speech, in a way that allows me to have no doubt that I understand the true meaning of Gimpel's words. However, I have no similar familiarity with Iranian culture. Is it possible I have been misunderstanding their political jokes? have we been giving too much weight to statements that are not intended to be taken seriously? in other words, is it possible that Iranians hearing Gimpel's speech will come to the conclusion that he is speaking seriously?

Posted by Benjamin of Tudela at 1:29 AM