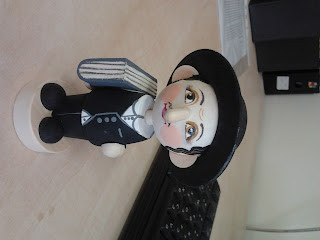 I spotted this little statue on the desk of a co-worker. When I inquired to its origin he told me that he bought it in Poland, where they are sold as "lucky charms". In fact there are three types - the rabbi with a Talit, the Jew holding a coin, and this particular one the "Talmudist". They are each a charm for luck, wealth and wisdom respectively.

A search online revealed that they are known as "Zydki" - Jordie Gerson explains:

Today, Jewish figurines are as likely to be shaped by nostalgia as stereotypes. Some--like the ones I saw that October afternoon--still sport oversized noses and hold moneybags, but they are now mixed in with more marketable figurines that romanticize Poland's Jewish past.Which may, ultimately, reflect the status of Judaism in contemporary Poland. Today, Jews and Poland's Jewish past are treated with a mixture of animus and nostalgia, awe and hostility, and the Holocaust tourism that helps support the Polish economy is both resented and revered. Like Jewish figurines, the real Jews who fill hotel rooms in Krakow and Warsaw occupy a place in the Polish imagination that straddles the line between actuality and fantasy, memory and the desire to forget.

Posted by Benjamin of Tudela at 10:20 AM