A few days ago I showed how Ha'aretz had negligently reported that the US State Department had for "the first time" cited settler violence as terrorism.

I had a look again at the story today, and surprise the word "first" has been deleted from the title of the page. Here is the original title:

Here is the current page:

As you can see they changed the title to remove the "first" claim. The same corrections were made in the Hebrew version of the article - only there they left a double gap in the first sentence where they deleted the  word "first" (לראשונה) used to be. 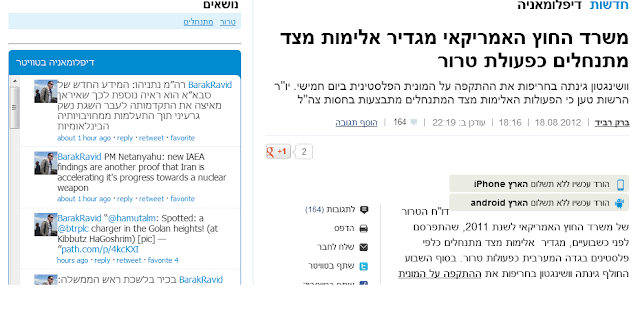 Ha'aretz did not post a correction (or at least I haven't found it).

The Guardian continues to publish the story, despite it being debunked.

"Contrary to that stated in the front page (Ha'aretz 19.08) this was not the first time the US Department of State classified Settler violence as terror".
Posted by Benjamin of Tudela at 7:59 AM