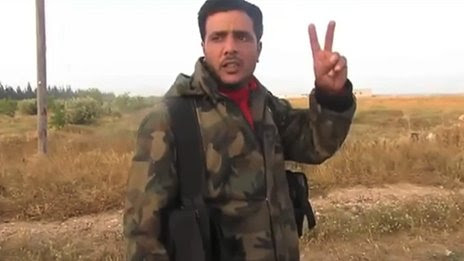 The BBC has a terrific interview with the Syrian heart eating cannibal. After some discussion of did he or did he not actually take a bite from the heart, the Syrian soldier tries to put things in context::


"He goes on to talk about the man whose flesh he held in his hands: "This guy had videos on his mobile. It showed him raping a mother and her two daughters. He stripped them while they begged him to stop in the name of God. Finally he slaughtered them with a knife... What would you have done?"


Good question. What would you have done? The BBC reporter tries to give us his answer, in classic British understatement.


"Well, perhaps not make a meal of my enemy, I think."


You think? do you want to take another minute to consider?


Continue reading the main storyWell, perhaps not make a meal of my enemy, I think. At the time, Abu Sakkar's men greeted what he did with cries of "God is Great". Now the fighters looking after him while he recovers from an injury just seem a bit embarrassed.