I was sent this clipping by Email: 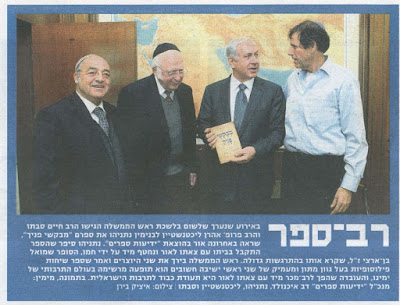 The caption at the bottom reads:

In an event that happened two days ago in the Prime Minister's office, Rav Sabato and Rabbi Professor Ahron Lichtenstein presented to Benjamin Netanyahu their book "Searching For Your Face" that was published recently by "Yediot Books". Netanyahu told that the book was received at his house as soon as it was published, and was immediately swiped by his father in law, the author Shmuel Ben Artzi Z"L, who read it with great excitement. The Prime Minister blessed the two authors, and said that a book of philosophical discourse, that is both deep and moderate, written by two important Roshei Yeshivah is an impressive event in today's cultural world, and that the fact that it immediately became a best seller, is a sign of honor for Israeli Culture.
Posted by Benjamin of Tudela at 8:43 AM