Haredi Men Selling Their Wives - A Pashkevil I'm Not Getting

Oneg Shabbat has this Pashkevil up - supposedly from Har Nof - that has me a little stumped: 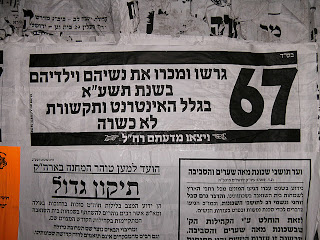 The Pashkevil literally says "67 divorced and sold their wives and children in 2011 (Hebrew date) because of the Internet and non kosher media" the bottom line reads "They have gone mad may god help us".

The simple meaning would seem to be that the writer knows of 67 couples that got divorced because of the internet. However I highly doubt anyone could have such a statistic, nor do I understand why they use the word "Sold". I'm open to anyone offering an explanation.

The same blog (if you don't follow it you really should) has this lovely Haredi comic: 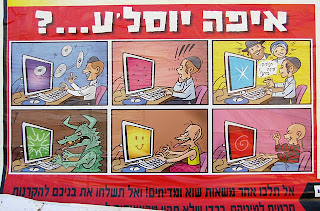 I especially liked how by picture three the kid already doesn't have any peot..
Posted by Benjamin of Tudela at 12:25 PM