Why are we creating a false story about Harav Lau? 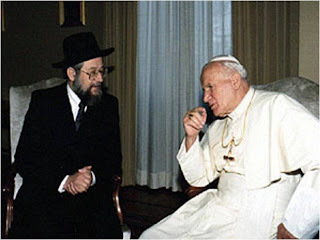 Rotter has a weird story posted - Supposedly at some past meeting between former Chief Rabbi of Israel Harav Yisrael Lau and the former  Pope (Z"l), Harav Lau told the following story: During the Holocaust a boy was left by his parents with some christians for safe keeping. At the end of the war, the parents of the boy never came back. The adoptive family wanted to baptize the child, but consulted the local priest. The local priest told the parents that they must respect the biological parent's wishes and send the child to a Jewish education. The parents complied, and the child eventually found his way to Israel.

The punchline - Rabbi Lau tells the pope "I was that orphan, and you were that priest". Problem? the story isn't true. At least not so far as Harav Lau is concerned. Harav Lau was not left by his family at the care of a  Christian family during the war, but rather he famously survived  the Buchenwald concentration camp.


So why do people feel a need to create such false stories? Pope John Paul II is actually credited with saving at least one 13 year old girl at the end of the war. Assuming that there is any historical truth in this story (a premise that google does not seem to support), my own guess is that someone heard the real story, and through the retelling the story got pegged to Rabbi Lau. Us humans hate anonymous stories, and after a few "broken telephones" the story is likely to end with a great punchline involving a well known rabbi and the pope.

Posted by Benjamin of Tudela at 7:54 AM