In honor of "Pretend to be a time traveler day" which was yesterday (but I'm pretending it is today), I have compiled a list of Jewish time travelers. This list is in order by which good Jewish boys are expected to believe in the element of time travel.

Moshe Rabenu - According to this famous Midrash :

R. Judah said the name of Rav: When Moses ascended on high he found the Holy One engaged in affixing coronets to the letters. Said Moses, “Lord of the Universe, who stays thy hand?” He answered, “There will arise a man, many generations from now, Akiva ben Joseph by name, who will extract from every tittle heaps and heaps of laws.” Said Moses, “Lord of the Universe, permit me to see him.” He replied, “Turn around.” Moses went and sat down behind eight rows [of R. Akiva’s students] and listened to the discourses on the law. Unable to follow their arguments, he was ill at ease; but when, coming to a certain subject, the students said to the master, “How do you know this?” And the latter replied, “It is a law given to Moses at Sinai.”

The time travel element is fairly straightforward. This midrash must be one of the better quoted ones, and so it gets a fairly high place in the list. We will add that Moshe Rabenu seems to have been taught quite a bit of the future at Sinai, even possibly learning the Halacha of wearing Crocs on Yom Kippur. 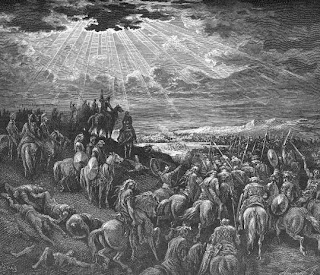 "12At that time Joshua spoke to the LordLord gave the Amorites over to the sons of Israel, and he said in the sight of Israel, in the day when the
“Sun, stand still at Gibeon,
and moon, in the Valley of Aijalon.”
13 And the sun stood still, and the moon stopped,
until the nation took vengeance on their enemies."
This gets the prestigious number 1 spot for several reasons. The first is that it is a biblical story as opposed to a midrashic one. The second is that the pshat seems to be time travel (and only Ralbag ruins the fun). The third reason is that it seems to have involved the entire nation of Israel, rather then just a single man.

There are numerous Hassidic stories involving some element of "Kfitzan Haderch" which I didn't include.
Stuff I remember exists but couldn't find - I'd love some help with these:
1. A misrash where Jeremiah meets Aristotle.
2. I have a strong memory of there being a Yerushalmi stating that R. Meir believes that a Sota is punished even if she will only betray her husband in the future.
Posted by Benjamin of Tudela at 12:44 AM