Death of Honi and our modern wars

Continuing with our theme of rain, is this little known story of Honi the circle drawer's demise. The story is told in Josephus:

Now there was one named Onias, a righteous man and beloved of God, who, in a certain drought, had once prayed to God to put an end to the intense heat, and God had heard his prayer and sent rain. Now seeing that this civil war would last a great while, he had hidden himself, but they took him to the Jewish camp and desired that just as by his prayers he had once put an end to the drought, so he might in like manner call curses down on Aristobulus and his supporters.
And when, having refused and made excuses, he was nonetheless compelled by the mob to supplicate, he said, "O God, king of the whole world! Since those that stand now with me are your people, and those that are besieged are also your priests, I beseech you, that you will neither hear the prayers of those others against these men, nor to bring about what is asked by these men against those others."
Whereupon the wicked Jews that stood about him, as soon as he had made this prayer, stoned him to death.
But God punished them immediately for their barbarity, and took vengeance on them for the murder of Onias…He did not delay their punishment, but sent a mighty and vehement storm of wind that destroyed the crops of the entire country, until a modius of wheat at that time cost eleven drachmae. (Antiquities 14.2.1 21)

The civil war that is taking place is the wars between the different branches of the Hasmonean dynasty. Honi is unwilling to pray against other jews, and is killed for his neutrality. In continuation of my last post, (And in a contrary spirit to it) I can but speculate that the rain did not  fall that year, because of the ongoing civil war between the Jews. Perhaps there is an ironic kernel of truth in what certain Rabbanim are preaching that our modern day drought is because of Rav Amsalem. Is it not possible, that our current drought can be attributed to the "war between the Jews"? 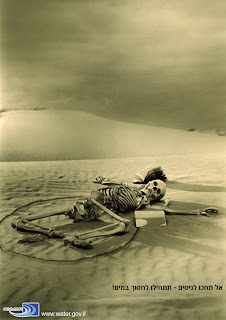 On a side note..this is poster from Israel's Water Authority. The writing reads "Don't wait for miracles- Start saving water!"

Posted by Benjamin of Tudela at 9:18 AM