The Israeli Supreme Court and The Trial of Jesus

I'm slowly working my way through the autobiography of former Supreme Court Justice Haim Cohn, which I recently inherited. I was somewhat amused by the following paragraph (As always I apologize in advance for the roughness of my translation):

During 1948, not long after the establishment of the Supreme Court, I then still the State Prosecutor, was called to Moshe Smoira, our first president [of the court], and he showed me some files, filled to the rim, with petitions for the Supreme Court to have a retrial for Jesus the Christian (ישו הנוצרי). The petitioners were protestant reverends from various countries, all arguing that now, with the establishment of the Supreme Court in a Jewish state, our first duty was to correct the mistake of our immediate predecessor, the Sanhedrin, 1900 years ago. The president informed me that he had discussed the matter with the the other Justices, and they -obviously- decided that they don't have the authority to hear these petitions....He also asked me to respond in his name to the petitioners and explain why we didn't feel we had the jurisdiction.
(Haim Cohn, A Personal Introduction, pg 305) 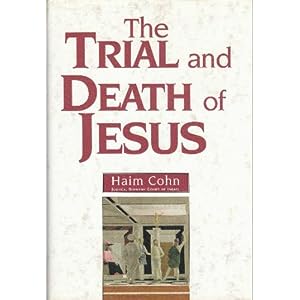 Haim Cohn went on to write the book "The Trial and Death of Jesus", which you can buy at Amazon second hand for just one penny!
Posted by Benjamin of Tudela at 1:20 AM